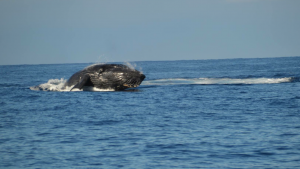 Our Tuesday Wake up with the Whales Cruise kept getting more exciting the longer we were out there. It started out kind of slow, as we headed north out of the bay towards the Mauna Lani Resort area. By the time we got there though, we found ourselves surrounded by 5 different pods of Humpbacks. All of them were surfacing, spouting, and sounding and all were fairly close to shore. And then we saw a ruckus on the water…which turned out to be a competitive pod of 8 Humpbacks. We were able to parallel this huge pod for almost 30 minutes as they charged south towards Keawa’iki (about 2 miles south of Anaeho’omalu). We saw lots of head lunges, lots of shoving around, a couple of spy hops, and heard lots of trumpeting as these big whales struggled to catch their breath. We also got to see a lot of aggressive bubble blowing (if you’re curious about that behavior, please check today’s “Fact of the Day”).
Mahalo,
Claire
Ocean Sports Whale Fact of the Day:  What’s the big deal about competitive Humpbacks blowing bubbles? First, let’s look at the “why”. Some researchers think that in a competitive pod, the male whale closest to the female may blow a wall of bubbles to create a screen blocking the view of her from other pursuing males – so it may be one of the many strategies in the male Humpback’s reproductive arsenal.
But perhaps what’s even more interesting about Humpback bubble blowing is the “how”. We know a Humpback can blow lines of bubbles from his blowholes and even from his anus. But those observed “walls” of bubbles seem to be coming from the whales’ mouths. We also know that a toothed whale can’t dislodge his epiglottis (so he can’t breathe in or out through his mouth like we can) — and this adaptation might have evolved to prevent accidental drownings through aspirated water. But a baleen whale, including our Humpback, has the ability to move his epiglottis slightly, allowing air to pass from the lungs to the mouth. This means that a Humpback could drown accidentally…but it also suggests that blowing bubbles through his mouth is a risk he’s willing to take.
On a slightly related note, researchers have observed schools of herring, while being pursued by Orcas (killer whales), generating extensive gas bubble releases from their anuses (flatulence). Due to the density difference of these bubbles compared to the surrounding sea water, these researchers theorize that the herring gas creates a barrier disrupting the echolocation abilities of the Orca, allowing the herring to escape predation. Something to consider if you ever find yourself being chased around the ocean by an Orca…