So Many Humpbacks Close to the Bay 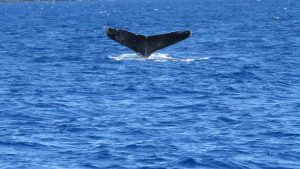 There was certainly no shortage of Humpbacks to see during Thursday’s Wake up with the Whales Cruise. We saw spouts in every direction we looked throughout most of the cruise. When there are that many spouts, it’s difficult to keep an accurate count of the whales in the near vicinity, but we’re guessing we might have seen 20 different Humpbacks. We were approached 5 different times by 5 different whales…and when we deployed the hydrophone, we heard a lot of distinct and loud voices, so we knew there were plenty of Humpbacks around that we weren’t seeing too.
The Humpbacks stayed in our area all day, and guests on our Whales & Cocktails at Sunset Cruise also got to see spouts, and dorsal fins, and peduncles in every direction. We even got to see flukes close up when a whale decided to sound just 40 yards from our bow. Captain Ikaika was doing his best to parallel any Humpbacks we saw, staying at least 100 yards away from them…but when there are so many whales in the vicinity who are spending most of their lives underwater, it’s inevitable that a whale will surface closer to us to take a look at our boat.
Have a great weekend…I’ll send out the next report on Monday.
Mahalo,
Claire
Ocean Sports Whale Fact of the Day:  If you’ve been following the local news (or reading our Facebook posts) you’re probably aware of the somewhat successful efforts of the Marine Sanctuary Large Whale Entanglement Response Team to help out an entangled Humpback spotted last weekend off of Maui. In 2016 we followed a similar story – that time, through the use of GPS tracking devices attached to the whale, the Entanglement team found that in the space of a week the whale circled the Big Island and then crossed the Alenuihaha Channel to Maui — all while entangled in more than 200 feet of heavy line and crab buoys. Pretty amazing! Researchers now know that it’s common for Humpbacks who aren’t all tangled up to swim between the islands too, though a directional trend has yet to be observed. In other words, some whales travel north to south, some south to north, and some travel back and forth…which, come to think of it, closely mirrors the behavior of our human visitors to the islands!