The Next Generation of Humpbacks 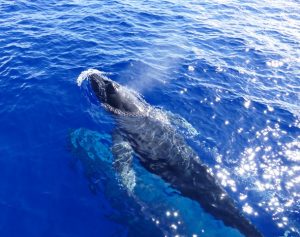 We watched 3 separate pods of Humpbacks during Tuesday’s Wake up with the Whales Cruise. Each of these pods was just kind of hanging around, doing their own thing…surfacing, spouting a few times and then sounding. Later in the cruise we found a Mom, her calf and their escort in very shallow water (only about 80 feet deep). We turned the engines off and watched as they surfaced closer and closer to us…eventually coming within about 50 yards of the boat. We also got to hear some great whale vocalizations when we deployed our hydrophone.

Guests on our Mid-Morning Cruise got to watch multiple pods of 2, 3, and 4 Humpbacks, and we began seeing them right outside of the harbor. The pod of 4 was further out to sea, and after watching them spout and sound once, we never saw them again, but the rest of the whales seemed to be spending time closer to shore off the Mauna Kea Resort. When we deployed the hydrophone we heard exceptionally loud singing…so lots of action was occurring underwater too.
Everyone decided it was time to come to the surface during our Whales & Cocktails at Sunset Cruise. We saw our first whales before we even left the mooring and the action continued for the entire cruise. It seemed like not a minute would go by without seeing at least one spout somewhere in our vicinity. We got a close look at a Mom/Calf/Escort pod too — baby breached at least 6 times just about 75 yards from us.
Mahalo,
Claire
Ocean Sports Whale Fact of the Day:  Researchers have observed that female Humpbacks with calves are accompanied by a male escort about 83% of the time during the winter season in Hawaii. Since nursing moms rarely get pregnant, we’re not sure why these males are hanging around…one theory is that the escort is trying to make a good impression on the female so that when she is receptive, she’ll consider the possibility of mating with him. Other researchers theorize that she puts up with the company of one male, hoping that he’ll scare off other amorous suitors (maybe dealing with one male at a time is better than having to deal with 2, 3, 4 or more).