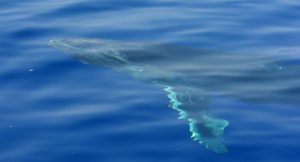 Humpback Swimming Right Below the Surface

Guest on Tuesday’s Wake up with the Whales Cruise got to see six different pods of Humpbacks all in front of Anaeho’omalu Bay. In the beginning of the cruise we watched some whales breaching, but before we could motor to them, we encountered a Mom/Baby pod. These two stayed with us for over an hour, culminating in a 5-breach tantrum from that little calf. Mom had a lot of white markings on the dorsal (top side) of her pectoral flippers, so she was really easy to spot when she was swimming right under the surface of the water.
On our Mid-Morning Cruise, we spouts from more than a dozen different whales, but spent most of the cruise watching 3 different Mom/Baby/Escort pods. None of the calves performed any surface activities while we were watching, though we did get to see lots of cute little twisting dives from each of them. We got to see all of the different Escort’s flukes several times and were able to note the differences in their markings. We also got to see two adult Humpbacks breach about 200 yards from us..one right after the other. When we deployed the hydrophone, we could hear several different Humpback singers.
Mahalo,
Claire
Ocean Sports Whale Fact of the Day: According to research conducted in Japan, the peak estrus period for Humpbacks (i.e. when females are in heat) overall, is between the end of January and the end of February, but the peak estrus period for females with a calf appears to be several weeks later. Our frequent observations of pods of Mom and Baby who are accompanied by an Escort at this time of year seem to support the validity of these findings. Although, we must take into account that many mature females without calves have already left Hawaii by the middle of March, so perhaps the males are just accompanying any female they can find (regardless of whether she’s in estrus).