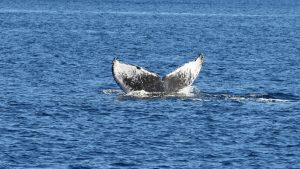 We had a beautiful day on the water on Thursday! Guests on our Wake up with the Whales Cruise saw 8 different Humpbacks, We spent most of our time watching two different Mom/Baby/Escort pods. Each of the whales in these pods was very calm. We got to see the baby in the first pod we encountered do some cute twisty little dives down to Mom, and we got to see each of the Escorts’ flukes as they sounded (see today’s photo for one of those beautiful fluke dives).
We also operated an Exclusive Snorkel Cruise on Alala out of Kawaihae Harbor. Guests on this cruise got to see a pair of Humpbacks spouting almost as soon as we left the harbor. After snorkeling, we watched a little competitive action going on between 3 Humpbacks (presumably a female and two males, but it could have been three males trying to decide who was most dominant). Later, we were surprised by a Mom/Calf/Escort pod who surfaced right in front of the boat. We watched the playful calf for awhile, and were impressed with how big each of the three were (even the calf).
Have a great weekend. I’ll send out my next report on Monday.
Mahalo,
Claire
Ocean Sports Whale Fact of the Day:  Not all whaling activity occurred during the “golden age of whaling” at the beginning of the 19th century. Based on catch records corrected for illegal Soviet whaling, a total of more than 200,000 Humpback Whales were killed in the Southern Hemisphere from 1904 to 1980. Also, Illegal Soviet takes of 25,000 Humpback Whales in two seasons (1959/60 and 1960/61) precipitated a population crash and the closure of land stations in Australia and New Zealand.