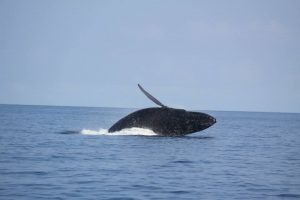 Landing after a Breach – Image courtesy of Stephanie Collier

The theme for Monday’s Whale Watch Cruises was “Baby Humpbacks”.
Before we even left the mooring  on our Wake up with the Whales Cruise  we were looking at spouting whales. Unfortunately, by the time we were able to get to where we thought those whales were, they had disappeared, so we headed out to sea to look at some whales we had seen breaching. On our way there, we were surprised by a mom and baby Humpback who surfaced close to the boat. The baby was on the surface a lot, and after watching him and his mom for awhile, we were surprised again when their escort surfaced. We got some great views of all three of them before they continued on their way together.
We started our Mid-Morning Whale Watch Cruise surrounded by Spinner Dolphins. After they moved on, we got to watch a couple of very active baby whales. We spent much of our time watching one calf tail lob, peduncle throw, and basically squirm around all over the place on the surface, and we got to watch him make several uncoordinated twisting dives down to his waiting Mom. We also watched his Mom push him around on her huge rostrum, and we got to watch her push him away from their surfacing escort as they all swam closer and closer to our idling boat. In the middle of all this action, another adult Humpback breached and then pec slapped about 75 yards from us before he sounded. And if that weren’t exciting enough, we were surprised when a second Mom/Calf/Escort trio surfaced just about 50 yards from our first trio…and this calf did a few little peduncle throws too.
Mahalo,
Claire
Ocean Sports Whale Fact of the Day: If you got a chance to see the national news today, you may have seen a story about the South African conservation photographer that ended up in the mouth of a feeding Bryde’s whale. Though this time there are corroborating photographs, it isn’t the first time people have made claims that they’ve seen the inside of a whale. Besides the obvious biblical story about Jonah, in the 1890′s, a whaler with very pale and mottled skin by the name of James Bartley claimed that he had been swallowed by a Sperm Whale. He said that he had been pursuing the whale off the coast of the Falkland Islands when he was thrown from his boat, and that after searching for him for a short while, his shipmates gave up on finding him, presuming he was lost at sea.
Two days after he went missing, the crew on The Star of the East killed a Sperm whale, and lo and behold — they found Bartley in the whale’s stomach! Supposedly, Bartley was a “raving lunatic” for several weeks, but then recovered enough to remember the experience — enough that he was able to make a modest living traveling with an exhibit of a stuffed Sperm Whale. Bartley claimed his skin appeared the way it did due to permanent damage caused by the whale’s gastric juices during the two days he spent inside the whale’s stomach.
At the time, the story of this “modern day Jonah” was very popular in religious tracts and broadcasts, but it has since been debunked. Besides the obvious fact that it wouldn’t be possible to live inside a Sperm Whale for two days, Bartley’s supposed ship “The Star of the East” wasn’t even a whaling boat! And even it had been a renegade whaling ship, there was no record of a James Bartley even working on board. Even James’ wife claimed the story was “a good yarn