Weekend Recap – Lots of Humpbacks Despite the Wind 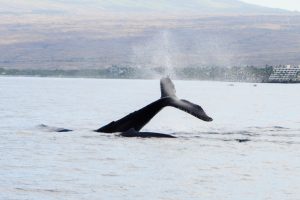 Lots to report from our weekend of whale watching, so I’ll stick to the highlights:
Mahalo,
Claire
Ocean Sports Whale Fact of the Day: Most Humpbacks are “right-handed”. Researchers looking at abrasions on Humpbacks’ jaws found more abrasions on the right jaw than on the left, and observed more “flippering” with the right flipper than with the left, suggesting a definite right-side preference among the Humpback population.