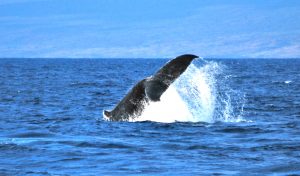 We ran just one dedicated Whale Watch Cruise on Wednesday…our Mid-Morning Cruise on Alala. We were barely out of the harbor when we received a phone call from our good friends at Mauna Lani Sea Adventures who were watching a Mom/Baby/Escort trio off of Spencer Beach (which is just south of the harbor), so we headed that way. Sure enough, Mom, her baby, and the escort were right where we thought they’d be, and those three whales spent over an hour surfacing and sounding near our boat. We got lots of great views of their spouts, and their dorsal fins, and even a few fluke sightings. But arguably, the most exciting part of the cruise was when one of those adult Humpbacks decided to express him (or her)self with a couple of peduncle throws.
Mahalo,
Claire
Ocean Sports Whale Fact of the Day: Why would a whale waste the energy to throw the back half of his or her body out of the water in a Peduncle Throw (sometimes repetitively)?? Since the whales won’t explain, all we can do is try to interpret their behavior in terms of what else is going on in their lives at that moment. We know that Humpbacks very rarely eat while they’re in Hawaii, and since a Peduncle Throw is a huge expenditure of energy (if you don’t believe me, try it yourself next time you’re in the ocean), it’s got to be important to the whale. Throwing half of yourself out of the water results in a huge splash and might be a way to communicate location, health, excitement, aggression or irritation to near-by whales. Especially if the near-by whale happens to be so near that he gets landed upon!