Surprising Discovery (See the “Fact of the Day”) 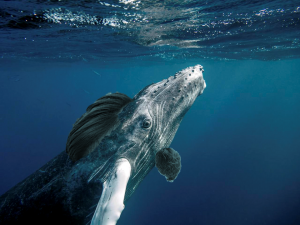 On Friday, most of our Humpback sightings were closer to Anaeho’omalu Bay than they were to Kawaihae. On our Wake up with the Whales Cruise, we were enjoying watching a lone Humpback spouting and then slipping under the surface when we saw some spouts further down the coast — which turned out to be from a Mom/Baby pod. Baby was surfacing every 6 minutes to spout, and Mom was surfacing with him every 12 minutes. At one point, while we were waiting in idle for them to reappear, they surprised us by surfacing just 30 feet in front of us, followed by a leisurely swim alongside us down our port rail. We also got to see some breaches from whales further away, and heard some fairly good songs when we deployed our hydrophone.
On Friday’s Mid-Morning Cruise from Kawaihae, we did see a Humpback, but that wasn’t good enough for us, so we called it a “Fluke” and invited everyone aboard to join us again on another Whale Watch Cruise for FREE.
Meanwhile, guests on Friday’s Snorkel and Whale Watch Adventure Cruise got so distracted by watching whales that we barely had time to snorkel! On the way to the site, we stopped to watch a lone whale spout and sound…and while he was underwater, we saw some splashing further to our north. All that commotion turned out to be from a Mom/Baby pod. We suspected that the splash which caught our attention was from Mom and Baby breaching simultaneously, but by the time we got closer, it was just Baby who was doing all the breaching. After watching his little breaching tantrum for awhile, we were just about to leave when we were surprised by the appearance of their Escort. When we finally tore ourselves away from all this activity to get in the water at our snorkel site, those of us who could get a couple feet underwater got to hear some pretty loud Humpback singing.
We began Saturday’s Wake up with the Whales Cruise surrounded by a small pod of Spinner Dolphins. After they tired of playing with the boat, we motored to where we had seen a whale sound, but before he surfaced, we saw more Humpbacks further to our south, so we went to investigate. Turned out that these whales were Mom and Baby, and baby was pretty curious about us. We got to seem him surface closer and closer, eventually swimming underneath the boat (Captain Will, who was watching our depth sounder, noticed the sudden change in depth…we weren’t moving, so it had to have been from the whales cruising below us). Later we watched another pod of two adult Humpbacks who we thought were heading over to see our Mom and Baby, but they never quite made it to us, and we saw some breaching from yet another pod of two who were way to our north.
Saturday’s Snorkel and Whale Watch Adventure Cruise was a lot like Friday’s…so much to see that we barely had time to snorkel! We were the object of interest for a curious Humpback calf, who’s Mom let him come within 30 feet of us. She must have trusted us, because in the time we were watching them, she never put herself between us and her baby. While all this was going on, we watched other whales breaching over and over and over again in the distance. When we finally got to the snorkel site, those of us who stayed on the boat got to watch some great pec-slapping, peduncle throws, and tail lobs from whales just about 300 yards from our mooring.
Finally, due to the 22nd Annual Lavaman Triathlon taking place at the Waikoloa Beach Resort on Sunday, we didn’t run any cruises...so nothing to report from the last day of March!
Mahalo,
Claire
Ocean Sports Whale Fact of the Day: If you’ve ever joined us on a Whale Watch Cruise, or are a consistent reader of this blog, I’m pretty confident that you already know that Humpbacks, being mammals, have hair…you may even know that Humpback hair grows in the form of individual whiskers. Recently, researchers working off the coast of Tonga discovered a South Pacific Humpback that not only had whiskers…but a full beard, and hair on top of his head (see the image above)! Amazing! You can read more about their fascinating discovery by clicking here.