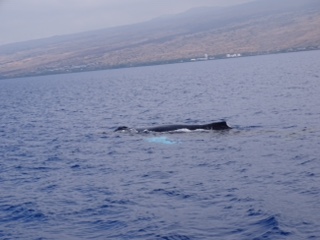 We operated a mixed-bag of cruises over the weekend, including dedicated Whale Watch Cruises, Snorkel Cruises and Sunset Cruises (both Exclusive and Non-Exclusive), and had a mixed-bag of cetacean sightings.
Highlights included listening to very interesting songs through our hydrophone during Friday’s Wake up with the Whales Cruise.
We got to watch a pod of 50+ Spinner Dolphins interacting with a lone Humpback we found just outside Kawaihae Harbor on Friday’s Mid-Morning Cruise. For awhile, no matter where this whale surfaced, he was surrounded by those dolphins. We’ve seen this type of interaction before, and it often appears that the dolphins are enjoying the encounter more than the Humpback (I’ve actually seen a Humpback “head-butt” a hovering dolphin…and watched the dolphin go flying)!. We didn’t see any physical encounters between the Humpback and the dolphins during this cruise, but eventually after surfacing in a somewhat random pattern (always surrounded by those dolphins), our Humpback came up alone, right next to our boat, so maybe he was using us to rid himself from them!
On Friday’s Exclusive Sunset Cruise, a very elusive Humpback gave us the slip. We saw him sound from a bit of a distance away, so we positioned the boat in the area we thought he’d next surface. After waiting around for about 30 minutes, looking in every direction for his spout, we gave up…we have no idea where that whale went! Later in the cruise we saw spouts from what we thought might be Mom and Baby Humpback, but turned out to be two adult whales of different sizes. After they sounded, we saw more spouts, but didn’t have time to investigate.
On Saturday’s Snorkel & Whale Watch Adventure Cruise, we watched a Humpback lift his flukes to sound, so we motored over, and after about 15 minutes, this whale didn’t just resurface, but he resurfaced with a breach. We watched him breach 4 more times, followed by a pec slap, and then another breach a few minutes later. While we were waiting for him to resurface, we lowered the hydrophone and heard some pretty good sounds, so we knew there were still a lot of other whales around North Kohala – whales we weren’t seeing.
On Saturday’s Whales & Cocktails at Sunset Cruise, the Alala was surrounded by Spinner Dolphins for almost the entire cruise, which is really unusual (usually they get bored playing with the boat after several minutes). And shortly after the Spinners joined us, we saw Mom and Baby Humpback, and eventually we got to see their escort surface. These whales stayed with us too, and we got to see Baby breach 5 times. Not to be outdone by a little calf, one of the adults (not sure if it was Mom or the Escort) breached just about 50 yards from us.
Finally, on Sunday, we didn’t run any Whale Watch Cruises, so I’ve got nothing to share with you from April 7th.
Mahalo,
Claire
Ocean Sports Whale Fact of the Day: Humpback Whales have massive tongues. An 80,000 pound Humpback has a two-ton tongue!  Taste buds appear to be atrophied (probably allowing them only to sense saltiness – not sweet, sour, bitter. or umami)…and they are unable to protrude their tongues from their mouths.