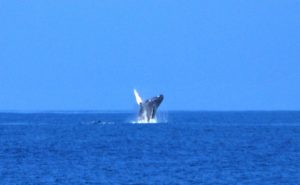 Breaching, a way’s away.

The Humpbacks are definitely here…on Monday’s Wake Up with the Whales Cruise, guests saw 5 different Humpbacks. The highlights included a very close encounter with two adult Humpbacks who chose to surface right next to us to check us out. We also saw 6 breaches each (that’s a dozen breaches, if you’re keeping track) from two whales further out to sea.
We ran a Private Snorkel Adventure Cruise on Manu Iwa in the morning too. Since we chose to snorkel close to home, we didn’t get to do any whale watching till after we were done exploring the reef, when we encountered a lone Humpback south of the bay, This whale was on a very short dive cycle, only spending about 7 minutes underwater between breaths. And when she was on the surface, she’d spout several times before lifting her flukes, so we got several good views of her.
Up in Kawaihae, guests on our Mid-Morning Cruise got to know a Mom Humpback and her baby pretty well. These two were basically just cruising around (led by baby) and stayed pretty near to us for most of the cruise. When we could tear our eyes away from them, we also got a glimpse of a lone sub-adult Humpback who took a quick breath or two before diving.
Finally, we took a family of 5 out on a Private Sunset Cruise on Manu Iwa. Mom summed up the experience by saying,”There are whales everywhere…this is the best day of my life”! We couldn’t have said it better. Despite the windy, and bumpy conditions on the water, we saw spouts from two lone whales almost immediately after leaving the bay. As we positioned ourselves to see them again, we were surprised when a different pair of Humpbacks surfaced and spouted. We spent most of the cruise paralleling what we thought was a lone humpback (but could have been a pair) come to the surface, spout several times, lift his flukes and dive, only to reappear after about 5 minutes, giving us lots of incredible views. Towards the end of the cruise, a Humpback breached behind the boat, but most of us turned around to see him a bit too late, and only saw the splash he created when landing.
This is my last Whale Report of the decade…look for more whale sightings and whale facts from us next year! 🙄
Mahalo,
Claire
Ocean Sports Whale Fact of the Day:  We know Humpbacks are big animals, but it’s not until we have a CLOSE ENCOUNTER that we really appreciate how big they are. But Humpbacks are only the 5th largest of the great whales — Blue whales, Finbacks, Grays, and Right Whales (including Bowheads) are all longer (on average)– and if you want to count the toothed whales in the list, male Sperm Whales are longer  too.