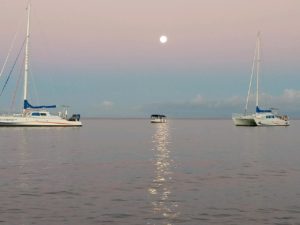 Full moon over the bay before Thursday’s Whale Watch Cruise

It’s been a mixed bag for Whale Watching this past week. After our great sightings on Monday, we operated just a couple of other dedicated Whale Watch Cruises from Anaeho’omalu Bay and though we tried searching to the north, to the south, near the coastline and further out to sea, we didn’t spot any Humpbacks.
Since we guarantee sightings on those cruises, all of our guests have the opportunity to join us again for free. And though we admit to being a a bit disappointed when we can’t find whales, those extra complimentary boat rides make up for it!
As we mentioned a couple of weeks ago, we don’t suggest you get too concerned by the scarcity of Humpbacks on the Kohala Coast in early December. Up until the last couple of years, we didn’t even try to find Humpbacks until December 15th, and even then, it seemed like the “floodgates opened” for Humpback arrivals the first week or so of January.
Have a great weekend! Our next dedicated Whale Watch Cruise is on Monday…we’ll send out a recap of our sightings again next week.
Mahalo,
Claire
Ocean Sports Whale Fact of the Day: Humpbacks can be found in all of the oceans of the world — and researchers now recognize 14 distinct populations of Humpback Whales. The whales we see here each winter are part of the North Pacific population. “Our” whales feed in the waters of the Gulf of Alaska during the summer months and swim the approximately 3000 miles to Hawaii each year presumably for social reasons…giving birth to their calves and mating.