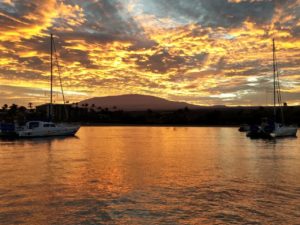 We often get asked what time of day is best for watching the whales, and though there isn’t a definite pattern of behavior we’ve ever been able to determine, yesterday, the best time was the late afternoon.
We ran a couple of whale-less guaranteed morning Whale Watch Cruises from Anaeho’omalu Bay on Monday, so we weren’t too sure what we’d see when we left the mooring for our Pau Hana Sunset Cruise. Turns out we didn’t have to travel very far out of the bay before encountering a very tiny calf and his Mom. The little guy was up on the surface and breathing every couple of minutes, so we got lots of glimpses of him. Of course, Mom surfaced much less frequently, but it appeared that she was letting him choose their path. The baby meandered all over the place, surfacing almost randomly but always about 100 yards from us, though at one point, they actually seemed to turn towards the boat before slipping back below. After trying to parallel them as they headed north for quite awhile, we saw something weird ahead of us on the surface, so we bid the whales “Aloha” and went to investigate. It turned out to be a garbage bag full of air and all wrapped up in fishing line. While retrieving that mess from the ocean, we saw another big spout further out to sea, but the sun was getting close to setting, and unfortunately, we didn’t have enough time left in the cruise to check that whale out.
Mahalo,
Claire
Ocean Sports Whale Fact of the Day: The gestation period for a Humpback whale is about 11 months, which means the calves we’re seeing this year were conceived last winter. We can only estimate gestation because oddly, researchers have never observed the same female mating and then giving birth (in fact, there has never been documented observation of humpback copulation or calving at all)! The prevalence of drone technology is getting us closer to documenting these events though. Last season, University of Hawaii researchers using their drones to study other humpbacks offshore of Maui got a call from a local tour operator about a lot of splashing they were seeing near an adult Humpback. The researchers got their drone in place in time to see a newborn calf, just minutes after her birth, complete with a very floppy dorsal fin and curled tail flukes. You can see the video by clicking here.