A Weekend of Whales 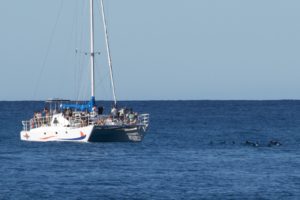 We had a good weekend of whale watching….here are a few highlights:
Mahalo,
Claire
Ocean Sports Whale Fact of the Day: Researchers have observed that Humpback calves are very playful, investigating all kinds of objects in their environment (including our boat), interacting with their moms, and even interacting with passing pods of dolphins. But for as many calves as we see in Hawaii during the winter, we have never observed the calves playing with each other. Though we’re not sure why this is, perhaps the new moms won’t allow a calf not her own to approach, because she doesn’t want to feed the wrong one.