Checked Out by Humpbacks 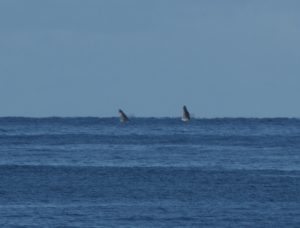 Guests on our Tuesday Wake Up with the Whales Cruise called out sightings in every direction almost as soon as we left the bay — so many, in fact, that we really weren’t sure which way to head. Our first close-by sightings were of a pair of adult Humpbacks who spouted and sounded but stayed underwater for 20 minutes before surfacing again. After watching them, we spent some time with a Mom Humpback, her baby, and their escort. This escort was HUGE — much bigger (so most likely, much older) than Mom. He surfaced pretty regularly, and showed his flukes on each dive. Then, while we were in the same area, a pod of 3 adult Humpbacks approached the boat. One of them was noticeably smaller — not small enough to be a calf, so our head naturalist Greg guessed he was a sub-adult attempting to hang with the big boys (or big boy and girl). These three swam right alongside the boat on our starboard side, just under the surface. After clearly checking us out, they surfaced at our 12:00 to spout, just about 30 feet away. We also got to hear some good sounds through our hydrophone, and a few of us saw some breaching from whales further away (more of us saw the splashes).
We also saw lots and lots of different Humpbacks spouting and sounding during our Mid-Morning Whale Watch Cruise – Captain Will estimated he saw at least 20 different whales. Though many of them were several hundred yards from us, we did get one close encounter while we were just drifting and listening to the whales singing through our hydrophone. A pair of whales surfaced, and one of them swam right alongside our boat — he didn’t seem to be in any kind of a hurry, and we got to watch him on the surface for a good 30 seconds or so before he sounded. We also got to see a half dozen breaches (including a double breach) from whales about 400 yards from us, and too many pectoral slaps to count from whales a couple hundred yards closer.
Though we saw lots of spouts from different whales during our Pau Hana Sunset Cruise with the Whales, we spent the beginning of the cruise paralleling a pod of three that were on the move. If this was a competitive pod, we weren’t seeing much competition, but these three were definitely surfacing spouting and diving together as they made their way up the coastline. Later in the cruise we came across a Mom/Calf/Escort pod, and after watching them for awhile, we came across another Mom and her calf. This second calf was burning off some energy, and we were excited to watch him breach 3 separate times.
Mahalo,
Claire
Ocean Sports Whale Fact of the Day:  We frequently see Mom and Baby whale accompanied by a third whale. We used to think this was a female helping mom take care of her baby, but now that we can identify gender more easily, we know it isn’t. It’s a male. Though a new mom infrequently ovulates, researchers believe that perhaps the male whale is “hoping to make a good impression” so when she is receptive, he may be the first to mate with her. Unless it’s a very strange coincidence, this escort is not the father of the calf.