Close Encounters and Plenty of… 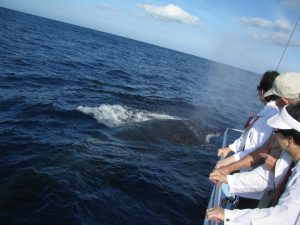 Our Thursday Wake Up with the Whales Cruise started off with a bang. We got to see two different pods of two Humpbacks spouting just outside the bay. After they sounded, we started searching for more whales…but though we had people looking in all directions, no one was seeing anything. While we were searching, we decided to stop for a moment to deploy the hydrophone and the sounds we heard were so loud and so clear, we figured the reason we weren’t seeing anything on the surface was that all the whales in our vicinity were underwater singing. About 30 minutes before the trip ended, while we were cruising back towards the bay, a pod of two whales popped up right next to the boat. We had no idea they were there, and as soon as we saw them, Captain Will put the boat in neutral. These whales swam right around us before sounding, giving us all great views. After they dove and we started cruising again, two more whales (who we also didn’t know were there) surfaced and decided to swim right alongside us, giving us the final close encounter of the morning.
We ran an Exclusive Snorkel Adventure Cruise in the afternoon with both Alala and Seasmoke departing from Kawaihae. As we left the harbor, we were met with one breaching whale, and another whale who was tail lobbing and throwing his peduncles (that’s the back-half of him) out of the water. After watching them for awhile, we headed down the coast to snorkel — and saw lots of spouts along the way. When we began our cruise home, we were entertained with whales all over the place. We saw lots of surface activities from a distance, but the highlight for guests on Seasmoke was when a pair of whales surfaced just about 50 yards off our starboard rails. After we passed them, one of them breached — not everyone was looking in the right direction to see the full breach, but most of us at least got to catch part of it.
Mahalo and have a great weekend. I’ll send out the next report recapping our sightings on Monday.
Claire
Ocean Sports Whale Fact of the Day: Humpback Whales (and, in fact, all Baleen Whales) demonstrate something called “reverse sexual size dimorphism”. This means that an adult female Humpback is larger than an adult male (by about 5%). Though researchers are not sure of the exact reason for the difference in size, they theorize that the increased size allows the female to store more reserves to feed and care for her calf, and also to give birth to a bigger calf who might have a better chance of survival than a smaller one. Average length for a fully grown female Humpback is around 45 – 50 feet. At her heaviest, she weighs 35 – 40 tons