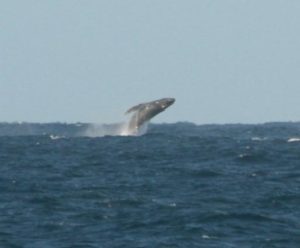 Breaching in the Wind

At this risk of sounding like a broken record, the winds were blowing in South Kohala on Wednesday.
When we departed the bay on our 8:00 Wake Up with the Whales Cruise, it was pretty blustery…but nothing compared to the winds we had experienced the last few days. Over the course of the cruise, we saw 4 different Humpbacks. Highlights included a breach about 200 yards from us, another breach about 400 yards from us, and several minutes of watching a couple of whales rolling around on the surface fairly close to the boat, We also experienced a moment when the winds calmed down so we took a chance and deployed the hydrophone. The sounds we heard were pretty clear, but to be honest, they were nowhere near as clear as the whale sounds our on-board naturalist Jason “sang” to us after he pulled the hydrophone out of the water. That guy’s got some talent!
On our Mid-Morning Cruise from Kawaihae…guess what?! The wind was blowing (lots of 50 knot gusts), but we encountered a big Mom Humpback with her big calf early on in the cruise. These two stayed with us for most of the trip (probably due to baby’s interest in us). The calf was really active too…we saw lots of breaches from this little guy as he burned off his baby-energy in the wind.
Mahalo,
Claire
Ocean Sports Whale Fact of the Day: According to researchers, the first Humpbacks to arrive here each season are usually females with a yearling, followed by immature whales of both genders, followed by mature, resting females (ovaries and mammary glands show no signs of recent activity), followed by mature males. The last to arrive are females in late pregnancy. Departure order is similar – First to leave are mature females who are either newly pregnant or “resting”, followed by immature whales of both genders, followed by mature males. Last to depart are new mothers with their calves.