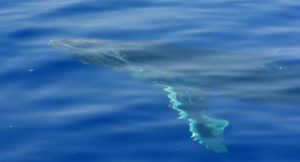 Humpback swims by, right under the surface.

Wow, did we have fun Thursday’s Wake Up with the Whales Cruise! Over the course of the trip, we saw 10 different Humpbacks. Most of them were in pairs, but we encountered a trio, just north of the bay and about 3/4 mile from shore, who decided that we were worth investigating. These three swam right under the surface, all around and just under our idling boat. Since the water was really clear, we could easily see every tubercle on their bodies..and the white ventral (underneath) side of their pectoral fins just sparkled with that turquoise-y color that seems to be unique to Humpbacks near the surface on a sunny day in Hawaii. But as if those close encounters weren’t exciting enough, these three gave us more to watch. They were obviously trying to communicate something to each other…we saw too many tail lobs and pec slaps to keep count, and even a breach from one of them.
Guests on our Mid-Morning Whale Watch Cruise saw 6 different Humpbacks including a couple who breached several thousand yards from us. We spent most of our time with a Mom/Calf/Escort pod. While the boat was in idle, these three surfaced frequently, anywhere between 100 yards and 30 yards from us. We got some great views of the escort’s big flukes as he sounded, and even saw a bit of Mom’s flukes when she sounded. The little calf was on the surface to breathe every 3 minutes or so, which means we got to see a lot of him, while Mom and the escort hung out below, surfacing about every 20 minutes.
Have a wonderful weekend…I’ll post a recap of our weekend sightings on Monday.
Mahalo,
Claire
Ocean Sports Whale Fact of the Day: When we see a Humpback wave his pectoral flipper, it looks really floppy — as if there were no bones inside it at all. But if you were to x-ray that flipper, surprisingly, you’d find all the same bones and joints that we have in our arms — all the way down to the smallest digits of our fingers. According to researcher Spencer Wilkie Tinker, Humpbacks are missing what would be the third finger on a human.