Too Many Whales to Count 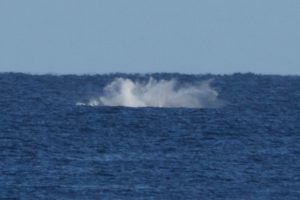 There were Humpbacks everywhere we looked during our Wednesday Wake Up with the Whales Cruise. Over the course of the trip, we saw at least 20 – 25 different whales (it’s hard to keep count when there are so many spouts). Our closest encounters came from a competitive pod of 3 who were chasing each other across the surface, and a Mom/Baby pod who swung over to take a look at us. There was also a big breach behind the boat that none of us but the Captain saw…and later another big breach behind the boat that almost all of us saw. Looking out in the distance, we also saw a different Humpback who was tail-lobbing repetitively, but didn’t have enough time to run out to investigate.
We didn’t have to travel very far to see whales on our Mid-Morning Whale Watch Cruise from Kawaihae. We spent most of our time watching a competitive pod of 4 whales cruising around off shore of the Mauna Kea Resort. Later, we saw a Mom/Baby/Escort pod hanging around just a couple hundred yards away from another Mom/Baby pod (which was kind of odd as female Humpbacks in Hawaii generally have nothing to do with each other). They weren’t interacting with each other, but they didn’t seem bothered by each other’s proximity either
Mahalo,
Claire
Ocean Sports Whale Fact of the Day: One of the questions we get asked most frequently on Whale Watch Cruises is, “How many Humpbacks visit the Kohala Coast during the season”?
Short answer: We think approximately 15,000 Humpbacks may visit the islands during the winter on a good year, but we really have no idea how many of them will swing by our Kohala coastline.
Longer answer: Again, we really don’t know. Aerial surveys have shown at any given moment 74% of the whales that are here, are in water less than 600 feet deep (and that describes the underwater topography off of our Kohala/Waikoloa coastline). It’s pretty rare to spot the same individual Humpback in the same location on more than one day, so researchers believe Humpbacks travel a lot while they’re here – and they don’t stay the entire winter around Hawaii. Average length of stay varies, but the longest observed visits are from mature males who might spend as much as 8 weeks here, females with calves may spend almost as long. Mature females without calves may spend as little as two weeks around the islands.