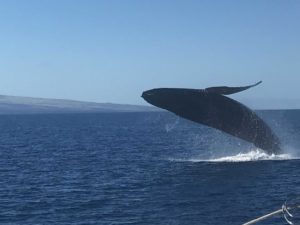 We were out on the water a lot over the weekend, and here are some of the highlights:
Ocean Sports Whale Fact of the Day: Humpbacks produce sounds in frequencies ranging from 10 hz to 24 khz. A healthy young adult human can generally hear sounds in frequencies between the ranges of 20 hz to 20 khz which means that we’re not hearing everything the whales are singing.