Humpbacks Breach Repeatedly…Could You (Even Once)? 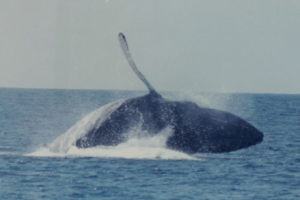 We wish you could have joined us on Thursday’s Wake Up with the Whales Cruise. Though we still had some pretty brisk trade winds blowing throughout the duration of the cruise, we saw somewhere between a dozen and a dozen and a half different Humpbacks. Highlights included watching a whale about a mile away from us at our 10:00 breaching repeatedly. And when we got tired of looking that direction, all we had to do was turn our heads to the south, to see another whale breaching and then tail lobbing…and those activities continued non-stop for 10 minutes.  As exhausting as it was to watch that frenzy of activity, we can only imagine how exhausting it must have been to do (see today’s “Fact of the Day” for more on this expenditure of energy)!
We also operated an Exclusive Snorkel & Whale Watch Cruise in the morning from Anaeho’omalu Bay. On the way to our snorkel site, we saw some Humpbacks spouting out on the horizon, but the wind was blowing too strong for us to travel out there to investigate. While we were on the mooring and the guests were in the water, those of us on the boat saw some breaching out to sea. Finally, on the way back home after lunch, some of us saw a calf spout (though we never saw his body on the surface…or his Momma).
Have a great weekend. I’ll post the next report on Monday.
Mahalo,
Claire
Ocean Sports Whale Fact of the Day: Just how difficult is it for a 40 ton, 45 foot long animal to “fly” from the sea in a total breach? Observers have reported seeing Humpbacks breach after only two kick strokes for propulsion. Based on the formula for calculating horsepower, measurements of laminar flow around cetacean skin (how water flows past the skin of the animal), girth and drag in the water, the breaching whale is producing between 1500 and 1700 horsepower in order to “catch air”. We used to think it was closer to 5000 horsepower, but with the aid of a calculator and more accurate measurements, we’ve been able to recalculate …still, try this yourself next time you’re in the water. We’re betting you won’t get very far!