Humpbacks Make a Comeback After the Swell 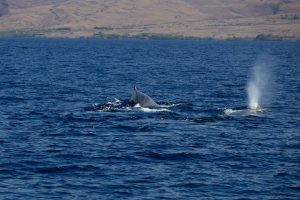 The ocean had really calmed down overnight, so we got some nice sightings on Wednesday’s Whale Watch Cruises.
Guests on our Wake Up with the Whales Cruise  from Anaeho’omalu Bay got to watch two different pods of 3 Humpbacks who were chasing each other around at the surface. We deployed our hydrophone a couple of times and the sounds we heard the second time were much clearer than those we heard the first time, but none of the singers sounded like they were particularly close by.
We also deployed our hydrophone during our Mid-Morning Whale Watch Cruise in Kawaihae, and we didn’t hear anything at all. Luckily, we had a lot to look at as we found a pair of adult whales just outside of the harbor. These two were on 16 minute dive cycles, so we got to see them several times. They actually surfaced just 40 yards from our idling boat a few times, which meant we got to hear them spouting too. Oh…and when they sounded, they lifted their flukes, and we were at just the correct angle to see the white patterns on the ventral sides of those flukes.
Finally, we took some folks out on a Private Whale Watch Excursion on both Seasmoke and Alala in the afternoon from Kawaihae. We found a Mom/Calf pod pretty early on in this cruise, and that calf began breaching. In fact, he breached continually for the hour and a half that we were watching….so many breaches that (and I shudder to report this), some of us actually got bored watching him. While all that was going on, another Mom/Calf pod cruised by us, and this calf breached a few times too. We were surprised to see an Escort surface a couple of times with this pod, and those of us who were glancing around saw spouts from other adult Humpbacks in the vicinity.
Mahalo,
Claire
Ocean Sports Whale Fact of the Day: For years, we’ve been telling our guests that researchers estimated a Humpback’s  fish consumption during the summer season to be somewhere around 2000 pounds per day. And if you do a quick Google search you’ll find that “fact” cited all over the place. Turns out that this may be just another example of how inaccurate information gets spread. Once a “fact” is listed in a book, it’s picked up on the internet and its spread can be exponential. According to researcher Briana H. Witteveen and her colleagues who conducted a study to determine the effect of Humpback predation on fish abundance near Kodiak Alaska, based on the documented stomach contents of Humpbacks “processed” through whaling stations back in 1937, combined with estimates of actual suitable prey availability, an average size Humpback whale is eating more on the order of 800 pounds (or about 576,000 calories) of food each day. Does that seem like a lot of food to you?