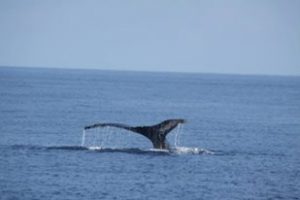 The surf was still rolling in on Tuesday, but the wind had quieted down from Monday, and the conditions were safe, we decided to give Whale Watching a try.
Guests on our Wake Up with the Whales Cruise not only braved the seas, but also had a bit of rain to deal with now and then during the cruise. Since travelling a long distance was challenging, we tried to find Humpbacks near the bay, and we even tried deploying the hydrophone. Unfortunately, we didn’t see or hear any whales…so we called it a “Fluke” and invited everyone aboard to try again with us for FREE.
On our Mid-Morning Whale Watch from Kawaihae, we had some lumpy, bumpy conditions, but we found a Mom/Baby/Escort pod almost immediately after departing the harbor. They disappeared from sight right after we sported them.  So, we headed towards a lone whale who was spouting at the surface. This whale also disappeared, but we found our Mom/Baby/Escort pod again and got to spend some quality time watching the three of them.
We also ran a Private Whale Watch Cruise for the Waikoloa Seniors. These folks are always such fun, and they brought us great Humpback luck. We found a pod of 3 whales who were surfacing every 3 – 7 minutes. We got lots of great views of them spouting, and saw lots of dorsal fins and flukes. They seemed to be interacting quite a bit with each other, which made us think they were sorting something out, but none of the interactions we witnessed on the surface looked to be at all aggressive.
Mahalo,
Claire
Ocean Sports Whale Fact of the Day: What does a Humpback whale drink? We know the Humpback doesn’t sip on ocean water – he can’t because he’s a mammal and the salinity of his tissues is less than that of the ocean (so, like us, if he drank salt water, he’d dehydrate and die). We also know there’s no fresh water to drink from in the ocean. When the whale is feeding, we know he gets liquid from the tissues of the fish he’s digesting…and we know calves get liquid from their mother’s milk. But how does the Humpback survive through the breeding season when he’s not feeding? It turns out that one of the main by-products of fat metabolism is the production of water. Humpbacks burn a lot of fat during the breeding season and because they are much more efficient users of the water they produce, they can survive. They don’t have tear ducts, sweat glands or salivary glands…and they have incredibly efficient kidneys which concentrate salt in their urine.