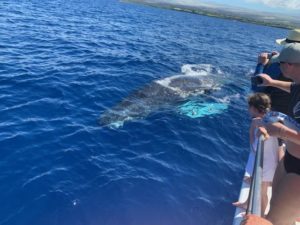 “Mugged” by a curious Humpback. Image courtesy of our head naturalist, Greg Nielson.

As usual, after a weekend of February whale watching, we have way too many sightings to report everything, so here are a few highlights:
Mahalo,
Claire
Ocean Sports Whale Fact of the Day: Before whaling was banned internationally, Humpback whales’ livers were processed for their oil, which contained a lot of vitamin A. A fully grown Humpback has a liver that weighs between 800 and 1400 pounds. An adult human’s liver averages between 3.2 and 3.7 lbs. (which means our livers are proportionally the same size to our overall body weight as theirs are).