“There’s a Whale Right Underneath the Boat”! 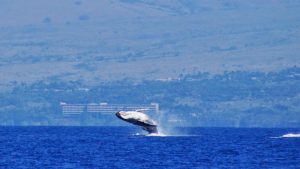 Breach Behind the Boat

Have you ever watched popcorn popping? That’s what it felt like watching the whales surfacing at the beginning of Monday’s Wake Up with the Whales Cruise. Guests joining us saw whales popping up in every direction we looked. We saw lots and lots of spouts, and then lots and lots of flukes as these different whales sounded. As we scanned around, we also got to see several splashes from different Humpbacks head-lunging and pectoral slapping all about 300 yards from us. When we got an opportunity to lower the hydrophone, we heard some pretty loud and clear singing, and while we were listening, we were approached by a whale who decided to surface at our stern and then swim along our starboard hull before diving again. For a grand finale, we even got to watch a whale breach behind us.
Guests on our Snorkel & Whale Watch Adventure Cruise saw a few spouts here and there as we headed to our snorkel site. While snorkeling, those of us who could get a couple of feet under the surface heard an entire symphony of whales singing…lots and lots of different voices. After playing in the water and eating lunch, the wind really picked up, and the whales in our area seemed to wake up. We saw several breaches and splashes from different whales between 300 and 600 feet away. We also encountered a Mom/Calf/Escort pod. Baby looked like he wanted to come over to see us, but the escort surfaced and veered him away. We paralleled the trio for awhile as they headed south and seemed to disappear. We were just about to turn the boat back towards the bay, when one of our junior sailors who was standing at the bow shouted out, “There’s a whale underneath the boat”! Captain Shane immediately put the boat into neutral, and we watched as not just one whale…but all three of our Mom/Baby/Escort pod surfaced right in front of us. Unbeknownst to us, they had turned our way after our last sighting and swam under us to check us out. After the three surfaced and spouted, the escort sounded again followed by Mom and Baby, and that’s the last we saw of them.
Mahalo,
Claire
Ocean Sports Whale Fact of the Day: Researchers off the coast of Brazil have discovered that some marine mammals including Humpbacks may have up to 14 spleens. Among other functions, the spleen stores red blood cells (which store oxygen)…so an extra spleen may help a deep diving animal stay underwater longer. These spleens can contract during a dive, releasing fresh blood with oxygenated red blood cells to keep the whale’s important organs alive and functioning. 14 spleens?! Amazing.