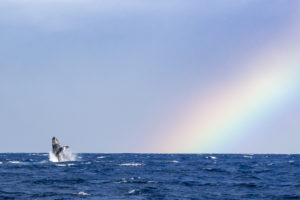 Breaching in the Wind – Photo courtesy of Martin Andreasen

The trade winds were brisk and the surf was up on Wednesday, but the conditions were safe for whale watching, so we gave it a go…and we were glad we did.
Guests on our Wake Up with the Whales Cruise had plenty to look at. Over the course of the cruise we saw a half dozen close-by whales, and unlike during Tuesday’s cruises, these whales were really active on the surface. Besides too many tail-lobs to keep count, we also saw plenty of peduncle throws from some obviously excited Humpbacks (or maybe they were irritated…it’s kind of difficult to interpret behavior accurately). We also saw quite a few breaches, including one that was close to the boat…and almost everyone aboard was looking in the right direction to see it. Were the ocean surface conditions influencing the behaviors of the whales today? We think so, and we’re not the only ones…see today’s “Fact of the Day” for more on this subject.
Mahalo,
Claire
Ocean Sports Whale Fact of the Day: Humpback whale communication signals comprise two different types: vocal signals, and surface-generated signals such as ‘breaching’ or ‘pectoral slapping’. Back in 2010, researchers reported that humpback whales gradually switched from primarily vocal to primarily surface-generated communication in increasing wind speeds and background noise levels. Why? Surface-generated sounds have energy distributed over a greater frequency range and may be less likely to become confused in periods of high wind-generated noise. Therefore, it may be easier for the whales to communicate to each other by splashing than by vocalizing when it’s windy.