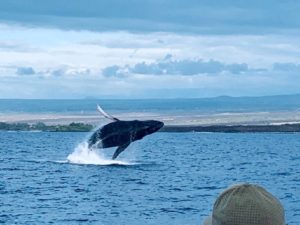 Hope you had a fun weekend…we sure did!
Guests on Friday’s Wake Up with the Whales Cruise saw 10 different whales — all of them were by themselves, and all of them were just spouting and sounding. Our closest encounter happened with a whale we didn’t even know was there. We were sitting and listening to the whales singing through the hydrophone when we saw a disturbance on the water right at our bow. Though we looked down, we didn’t see the whale…and it wasn’t until we pulled up the hydrophone and began motoring away that the whale surfaced…right where we had been sitting just moments before.
Guests on our Mid-Morning Whale Watch Cruise spent significant time with 4 different Mom/Calf pods. Two of these pods were accompanied by big escorts too (in fact, all of them may have been escorted, but we only got to see two different escorts on the surface). We watched one very young calf getting a ride on Mom’s rostrum (her head), and another young calf doing some very crazy and uncoordinated dives down to his mom. We also saw a breach about 1/2 mile from us, and later, a whale slapping his pectoral fins as he swam on his back behind another whale before they sounded – the non-pec-slapper, followed immediately by the pec-slapper.
On the way to our snorkel site on Friday’s Snorkel & Whale Watch Adventure Cruise, we saw several adult Humpbacks spouting, and those guests who were able to dive underwater at our snorkel site, also got an earful from all the singers close by. Probably the cutest thing we got to see happened on our way back to the bay after snorkeling when we encountered a calf who was either making a pretty good attempt at spy-hopping, or a pretty uncoordinated attempt at breaching. While we watched, he never really launched himself completely from the water, but we still gave him an “A” for effort.
Saturday was a good day for watching whales too. Our Wake Up with the Whales Cruise started with multiple sightings of a pod of two adult Humpbacks who were on 10 minute dive cycles. Later in the cruise, we came across a Mom/Calf pod. Baby seemed pretty interested in the boat and did several little head raises (not really head lunges and not really breaches) as he made his way closer and closer to us. We actually got to see the two of them alternating between swimming on the surface and right below the surface as they made their way towards our stern on our port side. Then they circled behind us, and cruised right up our starboard side. While all that was going on, we watched several tail lobs, and a couple of peduncle throws from whales even further behind the boat (we were pretty sure they were the same two whales we had watched in the beginning of the cruise).
As our Snorkel & Whale Watch Adventure Cruise departed less than an hour after we had returned from that first trip, we thought for sure that we’d find that same Mom/Baby pod who had circled the boat. But…we didn’t. The highlight of this cruise was getting to watch a full breach just about 50 yards from us. Meanwhile, guests who joined us on our Mid-Morning Whale Watch Cruise from Kawaihae saw spouts and/or flukes and/or dorsal fins from 20 different whales. Highlights included watching a Mom and her calf just cruising along the coastline, and getting to see a competitive pod of 4 whales. These 4 were really interacting…we saw lots of head lunges from at least one of them, and even a full breach just about 30 feet from the boat.
We began Sunday’s Wake Up with the Whales Cruise paralleling a pod of two adult Humpbacks who were traveling south at a good clip. After watching them for several dive cycles, we stopped to lower our hydrophone, at which point we were approached by a couple of different Humpbacks who were heading to the north. They actually swung by the boat to take a look at us, surfacing just about 50 feet away. Towards the end of the cruise, we found a Mom/Baby pod. Mom surfaced almost every other time her calf did, so we got quite a few sightings of both of them. On Sunday’s Mid-Morning Whale Watch Cruise, a really big pod of Spinner Dolphins greeted us when we were about 10 minutes out of the harbor. After watching them for awhile, we spotted a Mom/Calf pod. Baby was diving down to Mom frequently, and Mom was helping out by staying so near the surface that we could clearly see the turquoise reflection off her pectoral flippers. As baby approached closer and closer to us, Mom started surfacing between us and her calf…which must have frustrated the calf, because he breached just about 50 yards from us…and everyone aboard was looking in the right direction to see it.
Mahalo,
Claire
Ocean Sports Whale Fact of the Day: Humpback whales can’t cry — they don’t have tear ducts (they don’t need them — their eyes are always bathed in salt water) but they do have glands on their outer corneas which secrete an oily substance that helps to protect their eyes from debris in the ocean.