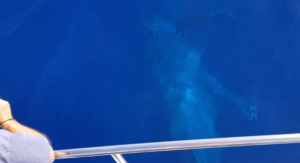 Humpbacks pay a visit to Alala. Click on the picture to watch the video.

We went out on a lot of cruises since the last report, so here are just a few highlights:
Mahalo,
Claire
Ocean Sports Whale Fact of the Day: Being mammals, a Humpback has a belly button (or as we say in Hawaii, a “piko”) – in case you’re wondering, it’s an “innie”.