What Sounds Do Whales Make? Don’t ask the kids… 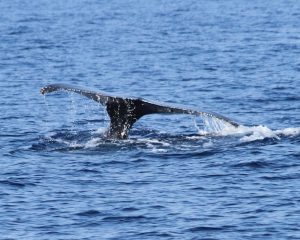 The seas were flat, and the winds and whales were very calm during all 3 of Tuesday’s Whale Watch Cruises.
We saw spouts before we even got out of the bay on our Wake Up with the Whales Cruise, so as soon as we got out of the channel, we headed towards those whales. The spouts turned out to be from a Mom/Calf/Escort pod, and we got to see all 3 of them multiple times. We got to see Mom push her baby up and out of the way by lifting him on her head (at least that’s what we think we were seeing). We were in a good position to see the fluke patterns of both adults, as even Mom lifted her flukes to dive. Later, we were approached at our 7:00 by a pod of two adults who surfaced fairly close-by before sounding. We got to see them a few more times when they surfaced and spouted while heading away from us at a fairly good clip.
Guests on our Mid-Morning Whale Watch Cruise witnessed the dissolution of a competitive pod at the beginning of our cruise. We also got a few good looks at different pods of two whales who surfaced and spouted near us. For a grand finale, one of these pods decided that 40 yards behind the boat was the best place to surface, surprising us all.
We also ran a dedicated Educational Whale Watch Cruise for Parker School’s 3rd graders, their teacher, and their parents. The kids got to see 3 different pods of two whales. All of these whales were surfacing, spouting, and lifting their flukes to dive. The kids knew a lot about Humpbacks already, and when we asked them what the whale song sounded like, they gave us all kinds of answers ranging from “cows” to “farts”. So, we deployed the hydrophone and the kids got to hear a lot of loud, clear singing. We didn’t hear any “farts” but we did hear lots of “moos” and a few “squeaky doors”.
Mahalo,
Claire
Ocean Sports Whale Fact of the Day: Humpback Whales play host to all kinds of other animals. Besides the barnacles we often see on the Humpbacks’ flukes and other skin surfaces, the whales can also carry tape worms, lung worms, sinus flukes, and whale lice (which are related to skeleton shrimp) among others. Not all of these parasites actually harm the whale (which means that technically, they can’t really all be considered “parasites”). In fact, the barnacles might actually benefit the male Humpbacks who appear to use the sharp edges of the shells (perhaps inadvertently) as weapons during competitive battles.