Competitive Pod Checks Us Out 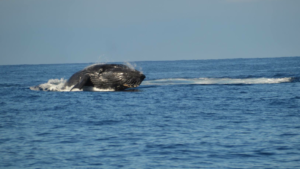 One Humpback from a Competitive Pod -Image courtesy of Susan Bagley

The wind disappeared overnight, and the ocean was like glass for Monday’s Mid-Morning Whale Watch Cruise. Guests joining us on this cruise saw 7 different Humpbacks, beginning with a pod of two who we saw spout and sound just about a 1/2 mile out of the harbor. After watching them dive, and waiting around for 25 minutes for them to resurface, we decided to check to out a competitive pod of 3 whales who were making a commotion a bit further up the coastline (our original pod of two finally surfaced again about 5 minutes after we left them, so it turned out to be a good decision).  Anyway, as we arrived in the area, the competitive pod decided to check us out, surfacing just 10 feet away from us on a couple of occasions. And, since we were in only about 100 feet of water, when those whales were cruising around under the surface, they were really easy to follow. We also got to see one of them do a peduncle throw, and saw some lazy motor-boating from them too. And if all this weren’t enough, we were met by a pod of Spinner Dolphins as we made our way back into the harbor.
Mahalo,
Claire
Ocean Sports Whale Fact of the Day: Biopsy samples taken from South Pacific Humpbacks show a ratio of 2.4 males for every female on the breeding grounds. A similar ratio has been observed in Hawaii. This suggests either: 1). female Humpbacks can afford to be choosy with their mating partner; or; 2). female Humpbacks are overwhelmed by aggressive males and bullied into mating.