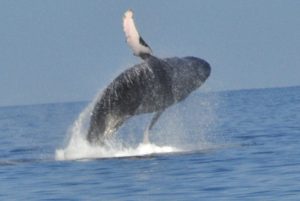 After seeing several Humpbacks spouting and sounding during Tuesday’s Wake Up with the Whales Cruise, we stopped for a bit and deployed our hydrophone. We listened to some nice, clear sounds for awhile and then continued on our way, only to see a whale surface very close to where we had been sitting several moments before. A guest with binoculars reported seeing a small blow further out to sea, so we headed over to what turned out to be a Mom/Calf/Escort pod. Shortly after we arrived, baby began waving his little pectoral flipper in the air, and then he did several peduncle throws. When an adult Humpback does this, it certainly looks like an aggressive move to us…but when baby is throwing the back half of his body out of the water we interpret that behavior as either attempts to learn what he’ll need to know to be a successful adult Humpback…or perhaps, throwing a bit of a tantrum due to excitement or excess energy. Regardless of the reason for his outburst, after he calmed down these three began traveling towards Anaeho’omalu Bay, so we paralleled them. Shortly before we got back to the bay, the escort breached…and then a few minutes later, breached again…both times just about 50 yards from us, and both times in the direction we all just happened to be looking.
We ran two cruises from Kawaihae Harbor. We found a Mom/Calf pod just outside of the channel buoys on our Mid-Morning Whale Watch Cruise, and this pod stayed with us for most of the trip. Both Mom and her baby were pretty relaxed, surfacing, spouting, and sounding multiple times as they cruised north. When we deployed the hydrophone, we heard some clear sounds, but we did have to turn up the volume, so we knew the singers were several miles away. After we deboarded this cruise, we boarded a group of keiki from Alaka’i Academy, their parents, and a few teachers for a dedicated Educational Whale Watch Cruise. Since we had spent the past 90 minutes watching Mom and calf, and since they were moving pretty slowly, we figured we had a good chance of finding them again. So we headed northut of the harbor, and were lucky enough to find these two just a bit further up the coast than we had left them. Again, they were in a relaxed mode, and again, we got lots of great views of the two of them surfacing, spouting, and sounding.
Mahalo,
Claire
Ocean Sports Whale Fact of the Day: We’ve never witnessed a Humpback taking care of two calves. We know she could conceive twins (and whalers occasionally would find twin fetuses) but we doubt she could carry twins to term. And even if she could, we really doubt she could produce the 200 gallons of milk she’d need each day to feed two calves!