Pod of 5 Travels With Us 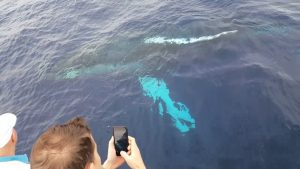 Check out that turquoise glow!

We found a lone Humpback within the first 15 minutes of Monday’s Mid-Morning Whale Watch Cruise from Kawaihae, so we decided to cruise over to him to see what would happen. As we watched, he was joined by another whale, and another, and another, and another…so suddenly, we were watching a pod of 5 Humpbacks cruising up the coastline. Often when so many whales get together we see some competition between them at the surface, but this time when the 5th whale joined the pod they all seemed to relax, slowing their traveling speed. At one point, the whole group came within about 25 yards of us, and since they were so close, and since they were swimming just below the surface, and since one of them had a lot of white on the dorsal (top) side of his pectoral fins, we all got to see that beautiful turquoise glow as they traveled past us (if you’ve never witnessed this yourself, see the image above…it’s not quite as fantastic as being here to see it, but it’s the best we can do in a blog post!). We did see other Humpbacks here and there…even a few breaching towards the horizon line, but we were focused on our 5-some for most of the cruise.
Mahalo,
Claire
Ocean Sports Whale Fact of the Day:  A Humpback Whale doesn’t reach sexual maturity till it’s about 35 feet long (age 5 or 6 for females, and a little bit later for males). Researchers have observed that most Humpbacks in the North Pacific don’t begin calving successfully till they’re at least 10 years old – the mean average is 11.8 years. In the North Atlantic, Humpbacks generally give birth for the first time between ages 5 and 7, reaching sexual maturity earlier too.