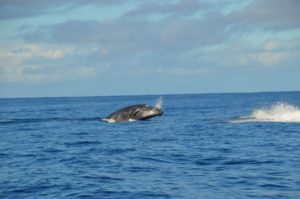 Have you heard that phrase, “Good things come to those who wait”? Well, that describes Tuesday’s Wake Up with the Whales Cruise. After cruising around for quite awhile, we finally found a Humpback to our north. We positioned ourselves and stopped the boat, hoping it would surface nearby. But after waiting (and listening to some good sounds through the hydrophone), we finally gave up and decided to head towards a smallish spout we thought might be from a calf…of course, two minutes after we left, the whale we were waiting for surfaced right next to where we had been.
Anyway, it turned out that we weren’t seeing a calf at all, as when we got to him. we realized he was doing 15 minute long dives (definitely out of the range of possibility for a newborn). So, since our time was almost up and we couldn’t wait for him to surface again, we began heading back to the bay…and that’s when the cruise got exciting.
We found a Mom/Calf/Escort pod just outside of Anaeho’omalu. As we were looking at them, another whale started charging towards our stern, generating a huge wave. This whale swam under us, and spouted at our 9:00 just about 30 yards away, as he made a b-line towards the Mom/Calf/Escort pod. So all of a sudden, we were watching 4 whales charging down the coastline. We saw lots of porpoising behaviors, and lots of motor-boating, and we heard lots of trumpeting from the adult whales as they jockeyed for position. Unfortunately for us, the whales were heading south, so we paralleled them for as long as we could before we finally had to turn the boat around and head back to the bay, arriving about an hour and a half after we were supposed to be in. Luckily, none of the guests had a plane to catch, or a tee-time scheduled, and we all agreed the extra time on the water was worth doing considering what we had just seen.
Mahalo,
Claire
Ocean Sports Whale Fact of the Day: According to research conducted in Japan, the peak estrus period for Humpbacks (i.e. when females are in heat) overall, is between the end of January and the end of February, but the peak estrus period for females with a calf appears to be several weeks later. Our frequent observations of pods of Mom and Baby who are accompanied by an escort at this time of year seem to support the validity of these findings. Although, we must take into account that many mature females without calves have already left Hawaii by the beginning of March, so perhaps the males aren’t choosing to join a Mom with her calf, but just accompanying any female they can find.