Grand Reopening Whale Watch Cruise Lives Up to Its Name 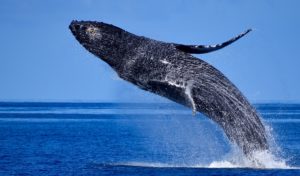 Aloha,
We’re not sure who was celebrating our first cruise since we shut down last March the most…our crew, our guests, or the whales!
On our Monday Wake up with the Whales Cruise we had quite the experience. We saw a total of 4 different whales but spent most of our time with a very energetic sub-adult (perhaps a newly abandoned yearling or two year old). He was on 10-12 minutes dives, but when he did decide to surface, he really made it count. We saw him breach…then dive, and when he surfaced the second time, he waved his big pectoral flipper, slapping the surface of the water with a huge splash, before diving again. When he next surfaced, he did a peduncle throw (throwing the back half of his body completely out of the water). After that expenditure of energy, he dove again, and when he came back up we watched him breach 15 times in a row…and he kept on breaching even after we had to leave him. Now that’s a GRAND RE-OPENING!
We also ran an Exclusive Whale Watch Cruise a bit later in the day. The first whales we spotted on this cruise were a pair of Humpbacks who spouted several times before sounding. We hung around the area, and after 22 minutes, they surfaced and spouted again several times before diving. On the way back to the bay towards the end of the charter we looked out to sea and saw a smaller Humpback breaching multiple times. We turned the boat and headed towards our breacher (who very well may have been the same whale our Wake Up With the Whales guests had been watching), but he apparently got tired of breaching and he slipped from sight before we got very close.
Mahalo,
Claire
P.S. Now that we’ve resumed catamaran operations, I’ll  post these reports as often as I can throughout the season to keep you updated on Humpback activity on our coastline. We’ll try to offer cruises daily, but we do rely on guest demand to operate. To check our cruise schedule, please visit our website, or call us at (808) 886-6666.
Ocean Sports Whale Fact of the Day: According to observations made by Humpback researchers in Hawaii, the first whales to arrive in Hawaii each year from Alaska are females with a yearling (who they may abandon upon arrival to the islands), followed by sub-adults (usually males) — the teenagers of the whale world. The next arrivals are adults who are looking for mates, and the last to arrive are pregnant females. It may just be a coincidence, but our first sightings have followed this trend.