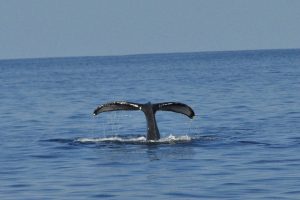 On Tuesday’s Wake Up with the Whales Cruise, we were surprised by the sheer number of Humpbacks surfacing within a few miles of Anaeho’omalu Bay. Throughout the course of the cruise, we saw at least 18 different Humpbacks. Most of them were in pairs, but there were a few solo whales popping up here and there too. We had a few close encounters with pairs of BIG Humpbacks who surfaced, spouted, and sounded within 100 yards of our idling boat. And when we looked further away, we saw splashes from breaching whales and even a few pectoral slaps. Since the ocean was calm, we were able to deploy the hydrophone, and when we did we heard a veritable symphony of Humpback voices…some from close by whales, and others from whales further out to sea.
Mahalo,
Claire
Ocean Sports Whale Fact of the Day: Though the Humpbacks we see average between 40 and perhaps 50 feet long, there is anecdotal evidence that the largest Humpback killed by whalers was 88 feet long. This Humpback was taken in the Caribbean.