Breaching Humpbacks, a Mugging, and Dolphins Too! 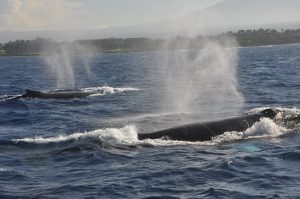 Aloha,
Guests on Friday’s Wake Up with the Whales Cruise got the opportunity to see Humpbacks all over the place. From beginning to end, we saw at least 10 different Humpbacks, but spent most of our time with a pod of two who were on 12 minute dive cycles. It seemed like every time they’d surface, they were just 100 yards from us, so we got lots of good views of them spouting and sounding. On our way back to the bay while we were still pretty far out to sea, a pod of Spinner Dolphins cruised right across our bow. Since we all found each other when we were in pretty deep water, our head naturalist Greg was almost certain these dolphins were heading in to shore to rest after their night of feeding on the vertical migration of weird sea creatures and fish that make up the bulk of their diet.
We were out on our Pau Hana Sunset Cruise for 30 minutes before we saw a breaching whale, but once he started, he just kept going. As we headed to the area where he was breaching, we counted 10 breaches before he settled down. But as we got closer, he breached 3 more times and then decided to head over to us (maybe to investigate all the noise we were making onboard). He spouted and sounded at our bow, so we waited around to see where he’d next surface, hoping it would be close by. After several minutes we saw a spout kind of far away, so we figured he had learned what he needed to learn about us and had left. Boy were we wrong, because just as we began to motor away, “our” whale surfaced right at our stern. Our head naturalist Greg recognized this whale as the newly abandoned yearling who’s been “mugging” us all week. After that last close encounter, our favorite whale of the week headed off on his own, and we got to watch a beautiful Kohala coast sunset, decorated by spouts from other Humpbacks in the area.
FYI, since our cruise schedule this year is based on guest demand, I’ll send out the next report when I can.

Ocean Sports Whale Fact of the Day: Humpback Whales and Spinner Dolphins are actually related — they’re all classified under the scientific order “Cetacean” (derived from the Greek word, “ketos” which translates to “Monster”).. But they’re in different sub-orders. Humpbacks are baleen whales, classified in the sub-order called “Mysticete”, while the Dolphins are toothed whales, classified in the sub-order “Odontocete”.For those of you etymologists out there, “Mysticete” either translates from the Greek “mystacoceti” meaning “mustached”, which is a pretty accurate description of how the baleen in these whales’ mouths appears…or is a “mistranslation” from the Latin “Mustiketos” which means “Mouse Whale” — perhaps one of the earliest examples of a scientist (in this case, Aristotle) demonstrating he understood the concept of irony. “Odontocete” shares a common root word with “orthodontist”…and means just what it sounds like — “toothed – whale”..