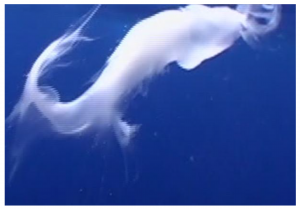 Whale milk floating in the water.

Our Monday Wake Up with the Whales Cruise began with a sighting of something small. At first we didn’t know what we were looking at, but as we approached the area, we realized we were looking at a baby Humpback. Baby approached us and spouted about 40 yards from us and a bit later, we saw his Mom and their Escort on the surface towards our stern. After that we saw a pair of big Humpbacks who spouted and sounded, and though we waited at least 20 minutes for them to surface again, they didn’t reappear, so we headed over to watch a second Mom/calf duo who had surfaced. Of course (as is often the case) after arriving in the vicinity of Mom and calf, we looked back and saw that our 2 big Humpbacks had finally decided to surface again, but with their long dive times we didn’t think it would be worth heading back to check them out. Later in the cruise, we were surprised by a lone Humpback who surfaced and crossed our bow fairly close by, and at the very end of our trip, as we were heading back in to the bay, we got to see our third Mom/Calf pod of the morning.
Just as we crossed the surf break while leaving the bay on our Pau Hana Sunset Cruise, we came across Mom Humpback and her calf. We got a couple good views of these two, but due to the fact that they were sitting right outside the surf line, we couldn’t stay to watch them for very long. After that, we went out to investigate a breacher. By the time we arrived in his vicinity he wasn’t breaching anymore but he must have thought we were interesting, as while we were sitting in idle wondering where he’d next surface, he crossed our bow within FEET of the boat. Towards the end of the cruise, we encountered a Mom/Calf/Escort pod. Baby was definitely burning off some energy (maybe he had just nursed?…see our Fact of the Day for more on that topic). We got to see that little guy breach at least 20 times before we had to head back to the bay.
Mahalo,
Claire
Ocean Sports Whale Fact of the Day:  Being mammals, Humpback Moms feed their calves milk. But Humpback milk isn’t just any old milk — it’s extremely rich with a fat content of approximately 50% so it doesn’t dissipate quickly in salt water (see the picture above). As a comparison, human milk contains only about 4.5% fat. Supposedly, Humpback milk tastes like “sweetened cod liver oil”…but I’m going to have to rely on what I read to verify that description!