Competition Below The Surface 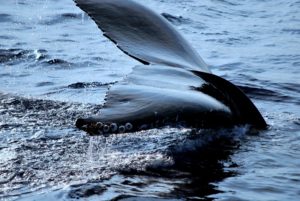 The only cruise we operated on Friday was our Wake Up with the Whales Cruise. Though we saw spouts here and there, we spent most of our time with Momma Humpback, her calf, and some escorts.
At first we weren’t entirely sure how many escorts were hanging around with Mom, but we knew there were at least two and possibly three. These males weren’t asserting a lot of dominance (at least not on the surface) but we got to see some splashing and some big arching dives from them. After watching for a bit, we realized that when we first encountered them, there actually had been 3 escorts. We knew this because we watched one of those big males do some sort of swirly thing with his tail below the surface of the water creating a wave on the surface (was that his way of expressing irritation at “losing” the battle?), before he peeled off from the rest of the pod …after which we got to see Mom, the baby and the remaining two escorts surface and spout. Since we were just kind of drifting along watching the pod, we took the opportunity to deploy our hydrophone. We heard a lot of whale voices, so we knew there were lots of whales in our area that we couldn’t see too.
Near the end of the cruise, all 4 of “our” whales surfaced just about 50 yards from us before diving. We took that close encounter as our cue to bid them all a fond aloha, and we turned the boat to make our way back to the bay. But as we’ve learned over the decades we’ve been watching whales, “it’s not over til it’s over”…and just before we entered the bay, we got to see one more lone Humpback surface, spout, and sound.
Mahalo,
Claire
Ocean Sports Whale Fact of the Day: Generally, the longer a mammal lives, the more likely it is to develop chronic diseases like cancer. Since Humpbacks and many other baleen whales have lifespans equivalent to ours, when you think of it, it’s kind of amazing that they don’t get cancer. Recently researchers investigating this anomaly came up with a possible reason why we don’t see cancerous tumors in big baleen whales. It turns out that cetaceans have many more Tumor Suppressing Genes than humans, and that the turnover rate for these genes is 2.4 times faster than it is in other mammals (in other words, their genes continually “fight” tumor formation). As an aside, the researchers also found that mutations in the genes that are biomarkers for some common human cancers are also correlated with hair loss…and a lack of body hair is certainly noticeable among cetaceans. Interested in learning more? Click here to read the just published research article.