How Humpbacks Express Themselves 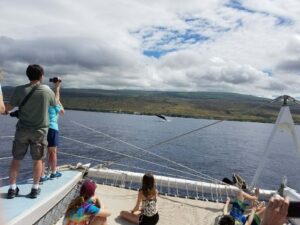 Aloha,
We operated just one Whale Watch Cruise on Thursday — our Mid-Morning Whale Watch on Alala from Kawaihae. We had barely left the harbor before we found our first Mom/Calf duo. We watched them for awhile, but then saw a LOT of splashing further out to sea, so we went to investigate. The surface commotion turned out to be from another Mom/Calf pod, and they were accompanied by at least one escort — maybe two. We got to see lots of breaching, tail lobbing and pec slapping from a distance and we weren’t sure if what we were watching was two escorts battling for dominance or Mom and just one escort expressing excitement (or irritation). As we approached, these whales seemed to tire out but we did see a couple of full breaches just before we got to the 100 yard mark. While we were waiting in the area to see if our pod of whales would get excited again, we deployed our hydrophone and heard some pretty loud Humpback voices. Finally, on our way back to the harbor we encountered our third Mom and calf pod of the morning and got some good views of them surfacing and spouting.
Mahalo,
Claire
Ocean Sports Whale Fact of the Day: There’s a time when a whale is still in its fetal stage that it’s covered in fur. By the time the calf is born, the fur has disappeared. Many researchers believe that this is another indication that whales have evolved from an animal with a common ancestor to a hippo. The idea that the stages of an animal’s fetal development reflect evolutionary development or “Ontogeny recapitulates Phylogeny” was first proposed by Ernst Haeckel around 1900