Humpbacks Right Outside the Bay 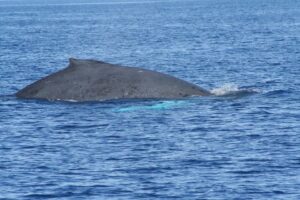 We hardly had to travel at all during our first Wake Up with the Whale Cruise of February. Though we were seeing lots and lots of spouts from Humpbacks all over the place, we spent most of our time with a lone Humpback who was on 10 minute dive cycles just outside of Anaeho’omalu Bay. While we were watching this whale, we also kept our eyes on a pair of whales who were hanging out in the same general vicinity. Interestingly, they weren’t completely synchronized in their dive cycles…sometimes we’d see one of them spout and dive before the other came up, but other times we’d see both of their flukes at the same time. When we deployed the hydrophone, we heard a veritable symphony of whales, so again there was a lot going on underwater that we couldn’t observe. Oh, and the only breaching we saw was way out on the horizon.
The Humpbacks were out in full force during our Pau Hana Sunset Cruise – and all of them seemed to be accepting each other’s presence happily. A couple of times we saw pods of multiple whales, which this time of year, usually ends up in competition as the whales work out their social relationships. But everyone we saw was just surfacing, spouting and sounding. We even watched a pod of two whales approach a pod of 3 whales, and that almost always results in mayhem, but if it did, it must have happened underwater, because we didn’t witness any craziness. Maybe all the whales in our “neck of the woods” had already known each other for awhile and there was nothing left to work out as it sure seemed to be a friendly couple of hours off the Kohala Coast.
Mahalo,
Claire
Ocean Sports Whale Fact of the Day: To our untrained ears, the sounds we hear from our hydrophones sound pretty random, though we have noticed the lack of certain phrases this year that we heard fairly often last year, and some sounds we are hearing this year that we didn’t hear at all last year. According to a paper published in the journal Current Biology, it turns out that our ears aren’t so untrained after all. Researchers have documented that the Humpback songs in the South Pacific are actually changing really quickly. Over the last decade, completely new song themes are appearing within a season. The researchers compared the radical evolution of the Humpbacks’ songs to human musical composition, suggesting that the themes are so novel; it’s as if whole new human musical genres were appearing that no one had ever heard just a few years ago.