Humpbacks Trust Us + a Hawksbill 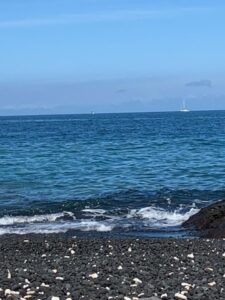 So much happened during Friday’s Wake Up with the Whales Cruise, that I’m kind of at a loss on how to summarize it into a couple of paragraphs! We started out the cruise with whales on 3 sides of us, but after watching all of them for awhile (and listening to other whales through our hydrophone) we saw some splashing a bit further out to sea. The splashes turned out to be from a competitive pod of 5 whales…we saw multiple pec slaps from them, and were amazed when two of these big, big whales split off from the group and came right to our bow to check us out. And when I saw right to the bow, I mean CLOSE — they spouted just about 10 feet from us. After checking us out, they returned to their competition, and we headed out too. We found a young Mom with her calf (she was only about 40 feet long) but as young as she was, she was pretty trusting and allowed baby to venture over to the boat. We got good views of Mom and baby when they surfaced about 20 feet away, and realized that they had an escort with them when they all surfaced again behind the boat. As we headed back to the bay, we were surprised when another whale breached about 100 yards away from us. Some of us missed that breach, but almost all of us saw the next breach! Oh…and to top it all off, when we were pretty far from shore, we saw a sea turtle…we’re pretty sure it was a Hawksbill (which is a fairly rare sighting off our coastline).
Immediately after this cruise, we took some folks out for a Private Snorkel & Whale Watch Adventure. Though we saw lots of spouts, and actually lots of other “whale body parts” both the on way to and from our snorkel site, the highlight of the cruise was watching a pod of 4 very active adult Humpbacks competing. We saw multiple tail lobs, peduncle throws, head lunges, pec slaps and even breaches from this group — and a lot of it occurred just 150 feet from our idling boat! Later, we got to see another competitive pod of 3, and they were asserting their dominance pretty close to us too.
Mahalo,
Claire
P.S. Enlarge the picture above and you’ll see us watching a whale doing a peduncle throw. The image was captured on the shoreline at Keawaiki while we were on that Private Snorkel & Whale Watch Cruise by our own, very talented Sheri D. Mahalo Sheri!
Ocean Sports Whale Fact of the Day: Humpback Whales have massive tongues. An 80,000 pound Humpback has a two-ton tongue!  Taste buds appear to be atrophied (probably allowing them to only sense saltiness – not sweet, sour, bitter or umami)…and they are unable to protrude their tongues from their mouths.