The Chase Was On! 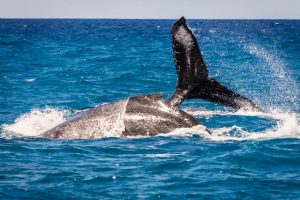 We spent most of our Wednesday Wake Up with the Whales Cruise watching 2 different pods of our favorite trio of Humpbacks — Mom, her baby, and their escort.  One of these pods spent some time checking us out. Baby popped up only 10 feet from our idling boat, and for awhile we could see the adults right underneath the boat about 50 feet deep. We saw some breaches from other whales further away, but when what we’re seeing close by is so fantastic, there’s much less incentive to cruise out there to see if those far-away whales will keep breaching!
Our next cruise of the day was our Snorkel & Whale Watch Adventure Cruise. We saw a few spouts here and there on the way to the snorkel site, but the real show occurred after we were done snorkeling. We found ourselves with whales on both sides of the boat. On one side, we were watching a Mom and calf duo, and on the other side, a competitive pod was going at it with lots and lots of huge tail lobs, and peduncle throws. And when we looked past our competitive pod we saw spouts from lots of other whales at the surface.
Our final cruise of the day was our Pau Hana Sunset Cruise. Just south of the bay we saw a Mom and her calf, and they were swimming south so we cruised that way to investigate. We’re not sure when it happened exactly but Momma and her baby were joined by one (possible two) male whales, and then the chase really began. We were cruising at 5 1/2 knots and we could barely keep up with the whales. We got to see lots of twisty dives from the adults at the surface, and lots and lots of head lunges. All this action apparently excited the calf, because we got to see him breach at least 8 different times. The pod continued on their course south, so eventually, we had to leave them to get back to the bay for the sunset.
Mahalo,
Claire
Ocean Sports Whale Fact of the Day: Yesterday’s Fact of the Day referenced the number of whale species documented in Hawaiian waters..and that inspired one of our readers to ask us how many total whale species there are in the world. Interestingly, researchers don’t agree on the number because species’ classifications are still a bit controversial. Saying that, we’ll defer to the Society for Marine Mammalogy (the largest international association of marine mammal scientists in the world) — they list a total of 14 species of Baleen Whales (suborder ”Mysticete”), and 72 species of Toothed Whales (suborder “Odontocete).