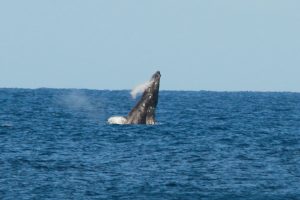 We didn’t run any cruises on Sunday, but what we saw during our two Whale Watch Cruises on Saturday gave us our “weekend whale fix”.
On our Wake Up with the Whales Cruise we saw spouts and dorsal fins and flukes pretty much everywhere we looked. We spent the beginning of our cruise with a Mom/Calf duo but then saw some splashing further up the coast which turned out be from a competitive pod. This group of whales wasn’t heading anywhere fast, but we saw a lot of head lunges, and a few breaches from them. We also got to see 2 whales up close when they chose to swim right under the boat.
As soon as we deboarded guests from that first cruise, we reboarded and headed right back out again on our Mid-Morning Whale Watch Cruise. As we were leaving the bay, we wondered if  — and hoped that — our competitive pod was still going to be competing, and actually, they were. We watched them for awhile until they either worked out their social hierarchy and calmed down or they just plain tuckered out. After that, we sat with Mom Humpback and her little calf for awhile, but then we noticed that our competitive pod had restarted their battle. As a grand finale for this cruise (and for the day), we got to see a few more head lunges and 6 full breaches from these big adult whales just about 150 yards from the boat.
Mahalo,
Claire
Ocean Sports Whale Fact of the Day: Humpback Whales play host to all kinds of other animals. Besides the barnacles we often see on the Humpbacks’ flukes and other skin surfaces, the whales can also carry tape worms, lung worms, sinus flukes, and whale lice (which are related to skeleton shrimp) among others. Not all of these parasites actually harm the whale (which means that technically, they can’t really all be considered “parasites”). In fact, the barnacles might actually benefit the male Humpbacks who appear to use the sharp edges of the shells (perhaps inadvertently) as weapons during competitive battles.