Well, That was Adorable! 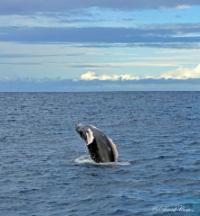 Aloha,
On our way out of the bay on Monday’s Wake Up with the Whales Cruise, a whale surfaced fairly close by at our 11:00. Of course we stopped to watch him, and then noticed a little calf a way’s away. Our 11:00 whale was too far from the baby to be Mom, so we suspected he was their escort. While we were speculating and watching the calf, the escort breached completely out of the water only 50 yards off our bow…and then he did it again…and then he did it a third time. After that excitement, we headed over to where we saw a lot of splashing from what turned out to be a competitive pod of 3 whales. They had quieted down a bit by the time we got to them, but we still saw quite a bit of surface activity. On the way back into the bay, we got to see a fairly large Manta Ray swimming right below the surface.
As soon as we got to our mooring, we deboarded and reboarded for our Mid-Morning Whale Watch Cruise. As we headed out, we were looking again for our Manta Ray, and found not just one, but SIX of them cruising around — 3 on each side of the boat. We got to watch a few barrel rolls, and saw them feeding. But this was a Whale Watch Cruise, not a Manta Ray Cruise, so we left the rays and headed out to sea. Throughout the course of this cruise, we must have seen 20 different breaches — though none of them were as close as the 3 we saw on our first cruise. We found a couple of Mom/Calf/Escort pods. One of these pods might have had 2 escorts, but at least while we watched we didn’t see too much interaction between those escorts — though their presence might have excited the calf, because we did get to see him breach (which is always just down-right adorable). And at the very end of the cruise, we stopped to watch a whale at the surface doing some tail lobbing. As we got there, he rolled on his side, waving his huge pectoral flipper at us. Then he submerged and re-emerged with a spy hop. After looking at us, he spouted again a couple of times before he lifted his flukes and sounded. What a day.
Mahalo,
Claire

Ocean Sports Whale Fact of the Day: For years, we’ve been telling our guests that researchers estimated a Humpback’s fish consumption during the summer season to be somewhere around 2000 pounds per day. And if you do a quick Google search you’ll find that “fact” cited all over the place. Turns out that this may be just another example of how inaccurate information gets spread. Once a “fact” is listed in a book, it’s picked up on the internet and its spread can be exponential. According to researcher Briana H. Witteveen and her colleagues who conducted a study to determine the effect of Humpback predation on fish abundance near Kodiak Alaska, based on the documented stomach contents of Humpbacks “processed” through whaling stations back in 1937, combined with estimates of actual suitable prey availability, an average size Humpback whale is eating more on the order of 800 pounds (or about 576,000 calories) of food each day. Does that seem like a lot of food to you?