Whales INSIDE of the Bay 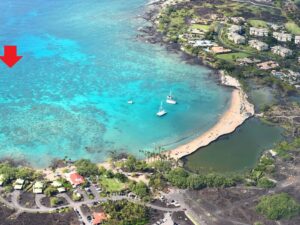 Humpbacks were inside of Anaeho’omalu Bay today!

As we were boarding our guests for Tuesday’s Mid-Morning Whale Watch Cruise, we were watching 2 adult Humpbacks INSIDE of Anaeho’omalu Bay (see the picture for an idea of where they were). They were swimming in just about 12 feet of water and drawing the attention of pretty much everyone who was paddle boarding and/or kayaking in the bay at the time (it was difficult to tell from our perspective, but we sure hope all those people were giving the whales 100 yards of distance). Since the dorsal-to-ventral (back to stomach) length of a fully grown Humpback has got to be 10 – 12 feet, it amazed us that they could even swim in water that shallow without scraping up their bellies!
By the time our guests were boarded, those A’bay Humpbacks were no longer on the surface. Since we really didn’t know where they had gone, we took our time leaving the bay (we didn’t want to crowd them if they were still hanging around inside).
We spent the rest of our cruise watching two or three Humpbacks who surprised us a couple of times by surfacing and spouting just about 40 yards from us. When we deployed our hydrophone to see if we could hear any whales singing, we were astounded at how noisy it was down there.
Mahalo,
Claire
Ocean Sports Whale Fact of the Day: Humpbacks produce sounds in frequencies ranging from 10 hz to 24 khz. A healthy young adult human can generally hear sounds in frequencies between the ranges of 20 hz to 20 khz which means that as noisy as it was today, we’re not even hearing everything the whales are singing.