A Little Bit of Everything from the Humpback World 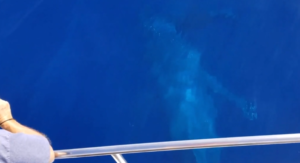 Aloha,
Guests on Friday’s Wake Up with the Whales Cruise saw a wide variety of Humpback behaviors. We started our cruise watching a Mom and her calf. The calf ventured over to see us, so we got some good views of him — and after Mom surfaced and spouted, she lifted her flukes ever so slightly as she sounded. Following that, we came upon a trio of adult Humpbacks. We found it kind of strange that they seemed to be co-existing peacefully, but maybe they had already worked out their social hierarchy before we got there. One of these whales decided we worth checking out, and he swam right below the boat from stern to bow. When he surfaced at the bow, he joined his 2 buddies, and we got to see all 3 of them lift their huge flukes right at our bow before they sounded.
After that, we noticed some blows to the inside of us, so we went over to investigate. Turns out that this was a great decision, as our spouter started breaching. We counted 7 breaches from him before he rolled over onto his back and lifted his pectoral flippers into the air for some resounding pec slaps. Then he spun over again and spouted a couple of times before lifting his flukes and sounding.
Mahalo,
Claire

Ocean Sports Whale Fact of the Day: In the early part of the 19th century, whales were hunted for more than just their blubber (which was used primarily as lamp oil). The meat was used mainly for fertilizer, the baleen was used for umbrella and corset stays, and their organs were processed to extract vitamins.