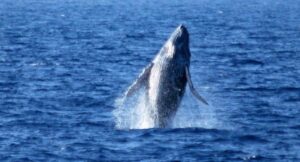 On Monday’s Wake Up with the Whales Cruise, we spent some significant time watching Mom Humpback and her little calf, though we almost missed seeing them entirely! We were headed out of the harbor going south, when Captain Kino caught a glimpse of a tiny spout behind him, so he turned the boat and headed back so everyone could see what he had seen. It turned out that this Mom and calf weren’t in sync with their diving and surfacing cycles. Baby would be on the surface for a few breaths every 3 or 4 minutes, and for every 3 of his breathing cycles, Mom would surface…but not till AFTER baby had dove. And when Mom was ready to dive, she’d move significantly but she wouldn’t arch her back (which was kind of strange to watch)…and then she’d lift her flukes vertically and high out of the water before disappearing underneath. We weren’t really sure what she was thinking, but it sure looked unusual to us.
After our first cruise ended, we re-boarded and headed right back out for a Mid-Morning Whale Watch Cruise. We found our Mom and calf pretty much where we had left them, but this time, baby decided to surface really close to our boat a couple of times…and Mom did the same thing. She was still out of sync with her calf’s breathing cycle, and she was still doing some strange sounding dives. After awhile, the calf started acting like every little kid we know, burning off some energy. We watched him breach at least 25 times — and at one time he was breaching more than 100 feet away from his Mom. He may have realized how far he had gotten from her and scared himself…or maybe Mom called him back, but regardless of why, we watched him join her again and continue his little breaching tantrum. Mom got excited too, peduncle throwing, tail lobbing and then lying on her back and slapping her huge pectoral flippers. Unfortunately for us, we ran out of time, and we had to do the most difficult thing we ever have to do…drive away from active Humpbacks.
Mahalo,
Claire
Ocean Sports Whale Fact of the Day:  Before whaling was banned internationally, Humpback whales’ livers were processed for their oil, which contained a lot of vitamin A. A fully grown Humpback has a liver that weighs between 800 and 1400 pounds. An adult human’s liver averages between 3.2 and 3.7 lbs. (which means our livers are proportionally the same size to our overall body weight as theirs are).