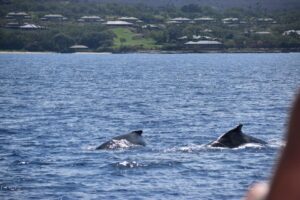 If you got a chance to read yesterday’s Whale Report, you’ll remember that we spent some time with a Mom/Calf duo. Well, we found the same Mom and Calf on Wednesday’s Wake up with the Whales Cruise — we recognized them because of their relative sizes, and also because of their very distinguishable white pectoral flippers. Once again, baby was surfacing to breathe every 4 minutes, and once again, Mom was surfacing about every third time her calf was up.
After watching them for awhile, we spotted two adult Humpbacks, and got to see them spout, and then lift their flukes for a deep dive. Since we figured they were going to be under water for awhile, we went in search of other whales. We think we might have seen those two again later in the cruise (or maybe it was a different pair of adult whales on the surface) but we know we found our Mom and calf again. This time they were both logging (for more on that, see today’s Fact of the Day). At one point it appeared that baby might have been resting on Mom’s rostrum (her head) — we could tell baby was perpendicular to Mom, but we couldn’t see for sure if there was any actual contact between them. Oh…and we got to see Mom breach too!
Mahalo,
Claire
Ocean Sports Whale Fact of the Day: What is “logging”? When Humpback Whales sleep, they float just on or under the surface of the water for extended periods of time, not moving (much), breathing every couple of minutes, and resembling floating logs (thus, the term). Interestingly, whales don’t sleep as soundly as we do — if they did, researchers believe that they’d drown. Humans breathe in response to carbon dioxide build-up in our blood, but Humpbacks and cetaceans have to keep part of their brain awake at all times so they remember to breathe in a process called “uni-hemispheric slow wave sleep”. Mallard ducks and some species of seals sleep this way too. The active half of the brain presumably is monitoring breathing and perhaps scanning the surroundings for predators, while the passive half is resting.