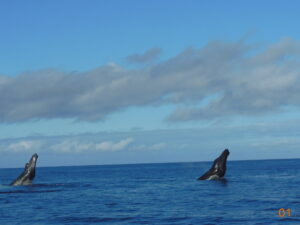 We ran several cruises over the weekend, so here are just a few highlights:
Mahalo,
Claire
Ocean Sports Whale Fact of the Day: Why do we keep commenting on the relative sizes of female Humpbacks and their escorts? Research published in 2012 documents that the largest female humpbacks associate and show a significant preference for the largest male humpbacks. This same preference didn’t seem to be as important to the males, as they’d associate with any size female (though the smaller males were more often seen with smaller females).
This “assortative paring” has rarely been documented in mammals – so why would female Humpbacks use size as a determining factor for mate choice? Since males aren’t involved in taking care of their calves, and since research demonstrates that a bigger calf is much more likely to survive, the size of her mate seems to be very important to a female Humpback. The sex differences in size preference by mature whales probably reflects the relatively high costs for big females to mate with small or immature males, compared to the lower costs of big males mating with small or immature females.
Body size appears to influence the adoption of mating tactics by the younger and smaller males too – but in a converse fashion. Smaller males avoid the costs of competing for the highest-quality (a.k.a “biggest”) females since they probably won’t be successful, instead focusing their attentions on smaller females that may or may not be mature, but at least will allow association.
And if it would help sum all that up in layman’s terms…for female Humpbacks, size matters.