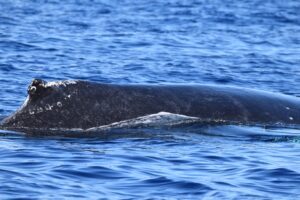 The only weekend Whale Watch Cruise we operated was Saturday’s Wake Up with the Whales Cruise. Guests on that cruise got to watch an interesting interaction between 2 adult Humpbacks. These whales were either curious about us or were more concerned with each other than they were with us, because they surfaced close to us on several occasions. We enjoyed seeing (and listening to) their huge spouts. Eventually, the whales either got tired of each other’s presence or worked out whatever needed to be worked out between them, and they split up, each heading their own way. Were we watching a male/female Humpback liaison gone wrong, or 2 male Humpback buddies that decided that splitting up would make finding a female easier? Unfortunately, all we could do was speculate.
We also saw spouts from some other lone Humpbacks further away from us, and when we deployed our hydrophone, we heard some singing, so we knew there were even more whales in our vicinity that were spending their time underwater.
Mahalo,
Claire
Ocean Sports Whale Fact of the Day:  Newly published research indicates that Humpbacks who are underwater are doing more than just singing or swimming…turns out that Humpbacks also sleep underwater! If you’re a frequent reader of these reports, you’ll know that last Wednesday, we found a Mom/Calf duo “logging” — they were sleeping either right below or at the surface, looking like semi-submerged logs. Well, an international team of researchers working off the coast of Norway used suction cups to attach omni-directional cameras to the backs of a few Humpbacks. This 360 degree view allowed them to see more of the whales’ lives, and after analyzing the data and watching the recovered videos, they found that Humpbacks not only “log” to sleep, but also sleep in groups while completely submerged. The researchers posit that the Humpbacks choose where to sleep based on ocean conditions, and their own physical conditions. Want to learn more? Click here.